We drove through snow peaked mountains as we climbed towards Chile. Then it was through the tunnel where the physical border is and out through more amazing mountain scenery. As we approached the border crossing traffic came to a standstill. This had to be the longest queue we had seen at a border. Luckily on the bike we were able to jump the queue somewhat.

The border crossing between Argentina and Chile is as easy as 1,2,3,4. The first time we had seen a totally integrated crossing, all in one building and coordinated. Well that’s the theory and it might work if you had a good grasp of Spanish.

We stood in line 1 for a while before realising there was more than one line 1, and of course we were in the wrong one. We found the right number 1, and we were stamped out of Argentina, next stop window 2, no queue and we were quickly stamped into Chile. Next we were directed to window 3. Joined a long queue and half an hour later it was our turn. Wrong window 3! For some reason our window 3 was on the opposite side of the building. Luckily we were allowed quick access and jumped that queue! Argentinian customs done with. Then it was window 4 where we joined all the people we had queued with at window 3 previously! Another 20 minute wait and Chilean customs was done and we were free to go.

On to the bike and through the obligatory customs check. All they seemed concerned about was the presence of fruit, they glanced in one pannier and the top box and we were told we could go. It seemed complicated and slow, but given we were dealing with both countries at one stop in hindsight it wasn’t too bad.

The road down from the border crossing is amazing. We didn’t count the switchbacks, but they seemed to go forever. Then it was through the mountains towards our first stop of Los Andes.

From there we had planned to go south for a bit before returning to Santiago and organising our return home. We headed towards Talca, 300km south of Santiago. We drove along freeways and made it through Santiago in good time. Good roads, tunnels, not much traffic. As we headed south we gradually noticed the traffic building up until we came to almost a standstill. Eventually we came to a massive toll gate, through that and the traffic eased a bit, but only for a few km.

We had discovered the night before that we had entered Chile in time for a 4 day long weekend, and we were heading south on the Saturday along with what seemed like most of Santiago! 300km of bumper to bumper traffic on a dual highway. In some places they were even sending a lane of traffic south on  the almost deserted north bound side. It was Australian Easter traffic multiplied several times. It wasn’t helped by periodic stops for tolls and even at one time some sort of police check, the only one we ever saw in Chile.

Eventually we made Talca where we stayed a couple of days before heading to Concepcion. Just as we came into Talca the ABS light came on the bike, so the next day Vin put new brake pads on hoping that would fix the problem, which it did.

At Concepcion we sampled the local fish and admired the coast, picturesque, but still struggling with black sand. We worked our way back up to Santiago via the coast, stopping at Constitution and El Tabo.

The drive up was not stunning like the Andes or the Karakorams, but it certainly was some of the most picturesque we have seen. Undulating, forested hills and farming country, vineyards and orchards with snow capped Andes on one side and the coast on the other, small towns and villages and good, paved windy roads.

Winding our way down the hills to Constitution we had some sort of vibration, and the bike didn’t seem to be handling well. A quick check found the rear wheel bearing had gone. Luckily Constitution had a small Honda dealer who had a bearing in stock and changed it with minimal fuss.

We stopped at El Tabo where we saw white sand for the first time, and again sampled the local fish and wine. Then it was a final drive into Santiago and time to make some decisions about getting home.

We had a few quotes for both flying and shipping the bike, and eventually decided we couldn’t justify the extra expense of flying. This meant a trip out to Valparaiso to deliver the bike.

A company in Australia gave us Martina and Enzo at Valparaiso as contacts and they organized everything for us. The bike is now crated and waiting for the Chilean customs strike to finish so it can be shipped….. I suspect several anxious weeks now hoping we see our bike again!

From Valparaiso it was a pleasant bus ride back to Santiago to get ready for the flight home.

Chile has been a surprise to us. Easy because there is a lot of English spoken. The people have been friendly and helpful, right down to the unknown young man who came and found us for our bus because he had overheard us talking about where we were going. Almost everywhere we went someone was happy to interpret, and if a Chilean says they speak English, “so so”, or “a little”, they are probably almost fluent! It is quite affluent, but there is still poverty. It has an amazing road system with lots of tunnels. Santiago is a huge modern city with lots of high rise living, but some pretty ordinary suburbs as you drive in. 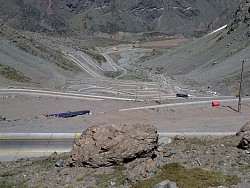 Switchbacks on the road from Chilean immigration 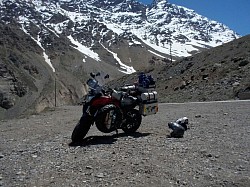 Last stop in the Andes!

Just a bit of a traffic jam at a small toll stop! 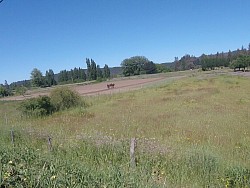 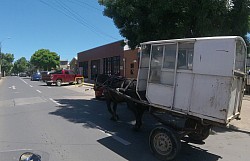 and the occasional horse drawn vehicle 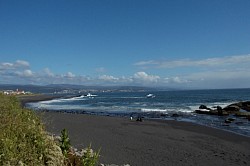 The Andes for a backdrop

Between Valparaiso and Santiago 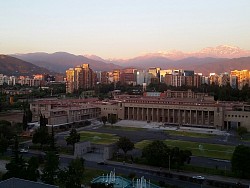 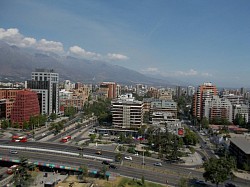 Santiago from our rooftop.
Made with SimDif 2
Vin and Mary Dowd