Crossing the border into India we were greeted by filth and stench that really tested the nostrils. It was a simple but rather lengthy process by the time the whole group had completed immigration and customs.

We stopped for lunch at a pretty ordinary hotel / restaurant. No choice, eat what you were given, rice and curry dish.

As a group we moved late in the day, we had 150 + km to travel to get to Imphal the nearest city. The roads were windy and mountainous and very slow going, plus we had several police checks on the way.By the time we arrived in Imphal it had been dark for nearly an hour, and we don’t like riding in the dark and it is particularly bad here in India. Crazy drivers , expect anything to happen.

We had had a pretty rough last 600km so we treated ourselves to an upmarket hotel as Mary had sprained her ankle in a fall back in Myanmar. We stayed 3 nights while Mary recuperated before heading to Dimapur where we stayed a further 2 nights. From there we headed to Guwahati.

After travelling only about 25km we were pulled over at a police checkpoint and held for some time not knowing what was going on while other cars where pulling up around us. After some time we finally were escorted by army escort all carrying AK47’s for about the next 20 km before being told we could proceed alone. There is history of unrest in the area, and we believe there had been an incident that  morning.

Quite a good road then we came onto a dual carriageway, only to find that cars come down the wrong way heading straight at you, but you must expect the unexpected in India!

After a long day in the saddle and going in circles in the city trying to find a hotel, we finally found “The Lily”. On enquiry the initial price was $160 – way above our daily budget, but on trying to leave the hotel the receptionist followed us back to the bike and kept lowering her price until she asked how much we were prepared to pay. We settled on $60, thankfully, as were exhausted.

Later in the evening the sales manager bailed us up and requested we bring the bike back from the basement carpark to the front of the hotel so he could take photos of us for the hotel website and fb page!

We are getting 5  star Indian treatment which can be a bit overwhelming at times.Every time we stop we are surrounded within a few minutes, constantly asked “Where you go” and “what is your purpose”, and they can’t comprehend that we are just travelling. The bike has been photographed constantly and we have had multiple requests for photos with strangers.

We have ridden through some picturesque scenery, unfortunately there is so much smoke and smog nothing is clear.

We have already come to hate the constant spitting, and am not sure whether we will ever get used to the smells.

We aren’t making very good time across India yet, so we are planning on heading to Siliburi tomorrow, quite a ride but we are told the road is good. We should be in Nepal in a couple of days. 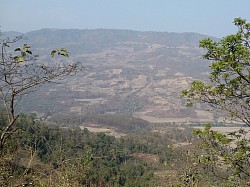 Hills somewhere between Imphal and Dimuphur 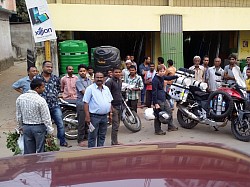 surrounded wherever we go 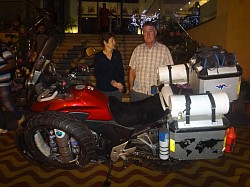 Posing for the camera at "Lily Hotel"

We were told the road to Siliburi was good, so we expected more of the double highway we had come in to Guwahati. Not sure if our gps went wrong, but we travelled a long way on two way roads, and every so often would come on a speed bump with no warning. We soon learnt where there was one there was always a second. We eventually came to a dual highway but there was a lot of roadworks and ultimately the dual highway just merged again into a two way. It took all day to go the 450+ km. We stayed a couple of nights then we decided it was time to head for Nepal. The border was not far. Really heavy traffic heading to the border, but exiting India and getting into Nepal was very quick and easy. 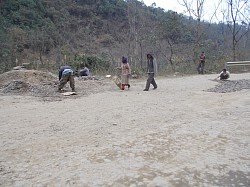 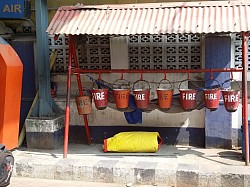 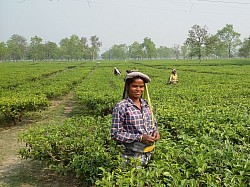 Tea picking near Siliguri, India
Made with SimDif 2
Vin and Mary Dowd