We received a phone call at 11.30 the night before we left to say the bike had arrived in Malaysia and we were sent details of where to collect.

We had decided to hire a car when we got to KL which turned out to be vital when it came to collecting the bike.First thing we had to do was organise insurance and an International Circulation Permit (ICP). We went to the head office of the automobile association (AAM) to do this. It was a bit difficult to find even though we were using the gps, which took us very close to the place, but we needed help to find the office.

The insurance process took a few hours, delayed because something was “down”, the ICP was organised once the insurance was fixed. We needed to show the carnet, passport, drivers license, international drivers licence, registration papers, and a photo of the bike. Cost was 53RM for one months insurance and 150RM for the ICP. They were very helpful , apologetic for the delay and gave us bottles of water while we waited.

We were advised the freight storage opened at 8.30 so planned to be there at 8. As it turned out we could have started earlier. It took about 4 false starts before we found the place to organise security passes. We then had to drive about a km to the cargo collection area. We went through the first checkpoint where the car was searched. They directed us to gate 1, about a further km on. There we had to sign in and were given a pass for the car. They then directed us to “COPE 2” about 500 metres further on.

Customs was back at the first gate, about 1.5km away. We eventually found the right department on the 6th floor.  They filled out our carnet, then told us to go to another building about 50 metres away to get the form signed. At that building they told us we had to get the bike first!

Back in the car, drive around through gate 1 to COPE2. Back to the second office, directed back to the first office. Told we had to go to customs but eventually sent to another counter where we were given a bill for 255RM for handling and storage. (Much less than we had expected). Then sent to the next building COPE 1.

At Cope 1 we were sent to bay 28. Presented our paperwork and told to wait. After about 10 minutes, the bike appeared, all intact. The attached pic is of the freight depot. Incredibly busy, this is just one bay in one building of a massive complex.

They were very helpful at the depot, moved the bike on the pallet to a vacant bay quite some distance away so we could unpack it and reassemble all the bits that had come off for freighting.It took about 2 ½ hours to unpack and reassemble. We had various interested onlookers the whole time. Anyway all went back together ok. Only problem was polycarbonate windscreens and duct tape don’t mix. The windscreen has ended up with crazing where the duct tape was, luckily it is not in the line of vision.

After all that it was back to customs who gave the bike a quick look over, checked the engine number, signed something and sent us back to level 6 in the other building. Back there, a bit more time and eventually our carnet was returned all completed. Back through the main gate where they did a check on the carnet and then it was back to the original security pass building to return our passes. Then we were free to go.

It took about 6 hours in all. I think it was a 13 step process, one of the customs guys commented that they were not as efficient as Australia!! 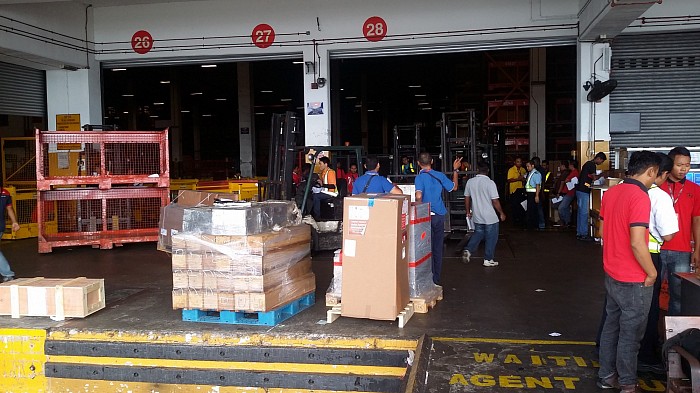