Another freezing cold border crossing and we were into Kyrgyzstan. Luckily we made it through before the long lunch break! We had expected it to get warmer quickly, but it only went from freezing cold to very cold! We were told there were no petrol stations until Naryn…too far for us. It wasn’t too hard to find the man with the petrol in one of the villages though. It was an excellent sealed road until the roadworks, about the last 20km to Naryn was rough and slow going.

Next problem, no accommodation, until we were offered a yurt, which proved to be warm with not too many leaks from the rain that started in the evening. And finally decent internet access!

The weather looked ominous next  morning, but we decided to dress for the rain and head to Bishkek. We were told it was a good road, but as usual “good” means different things to different people. The first 10km or so was again road works, this time rough and wet, then about 40 km of sealed road until we came to the real road works. Slow, rough and muddy, coupled with mobs of horses and sheep. We rode through some beautiful mountain gorges, but unfortunately it was too wet to stop and admire.

The road works finished before the real rain set in luckily. Then it was good sealed road, much of it dual highway, all the way through the mountains to Bishkek. The rain stopped before Bishkek and we were relatively dry when we arrived….apart from Vin’s “waterproof” jacket purchased in Pakistan.

Bishkek is a modern looking city, lots of parks, very clean with spectacular snow capped mountains in the background. Looking down from our hotel though was like looking back 40 years, with chickens and vegetable patches in small suburban backyards.

Due to the time lost in the China debacle, we couldn’t spend much time in Kyrgyzstan, and after only 3 nights crossed into Kazakhstan. The border crossing was probably the quickest we have experienced, stamped out of one and into the other with very little delay.

Then it was on to Almaty. The road was good, just an occasional pothole, one of which we managed to hit hard enough to crack the windscreen unfortunately. A local biker stopped for a chat while we did minor repairs. We had to get a new windscreen made in Almaty. We had also organised to get a new rear tyre through the KTM dealer (agent orange) in Almaty.

Almaty was a surprise to us. Almost everywhere we went someone spoke English. There was an abundance of restaurants and coffee shops and a real alfresco eating culture. The streets are wide, clean and tree lined. Drivers obey road rules, although we did get a sense of impatience at traffic lights. There are many well maintained parks. We got a real sense of affluence, although we were surprised to be approached by people obviously living on the streets.

We headed northwest towards Russia via the capital city Astana. Astana is 1200km from Almaty. We expected desert, but we got miles of undulating grassland country. It was over 600km to the first real city, Balkhash. The first 300km of road was filled with potholes and rough going. After that the road improved.  There were a lot of trucks, a few very small towns and very little evidence of farming or grazing animals. Near the road was an electric rail line, we passed both passenger and goods trains. We drove next to the Balkhash Lake for about 300km. The lake is partly saline, partly freshwater, it is aqua blue in places.

After the rough going to Balkhash, Vin decided it was time to put the new tyre on the back. He decided to do this himself, rather than find a repairer. Apparently it was supposed to be easier at low altitude in a hotel carpark, than last time when it was done on the side of the road at 3000 metres! Then we discovered the top box was cracking around the bottom bolts. It’s hard finding repairers in a city where we don’t speak the language. Our Russian English translator is getting a fair workout, but we need to brush up on charades! A change from Almaty, we have not come across anyone who speaks English here.

We headed north to Astana, spending a night in Karagandy on the way. The road was ok, but a bit slow going as the 200km from Karagandy to Astana was all under road works. They are constructing a dual highway, and with the amount of machinery they will be finished within a year.

Astana is a very modern city. Lots of tall buildings, wide streets and big shopping malls. It is quite a new city having been designed as the capital only about 20 years ago.

We headed almost due north towards Russia, stopping at Kokshetau and Petropavl on the way. The road went from “super-highway” 6 lanes, to dual highway, to two-way with road works.

The landscape through Kazakhstan was flat to low undulating. It was mostly tree-less. Through the centre there was very little agriculture, but north was huge open farming areas. We got a shock leaving Astana where the temperature was low 30C to run into cold, wet weather. It rained much of the way to Kokshetau. Although we are heading in to summer, the temperature in northern Kazakhstan is only mid teens, and we expect more of the same through Russia. We are also still adapting to the long hours of sunlight, sunset about 10pm.

We found the Yamaha dealer in Petropavl and had the oil changed, great service if you need motorbike service in these parts. Vin also found a new jacket…finally given up on the idea that summer here means hot, or even warm!

From Petropavl it wasn’t too far to the Russian border, approximately 50km. Not a bad crossing, quick and easy leaving Kazakhstan, a bit of a wait on the Russian side while they checked something, we will never know what, but we were through in about ¾ hour. It is a quiet border crossing, nothing much either side, and another 200+ km to Kurgan, the first reasonable size city in Russia. 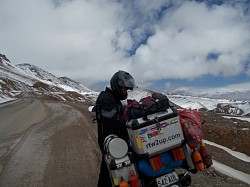 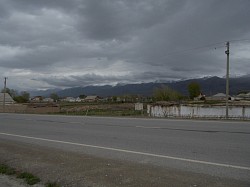 If you need petrol, find the right man! 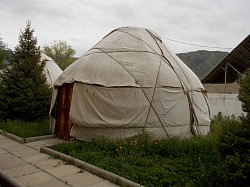 Warm and cosy for the night 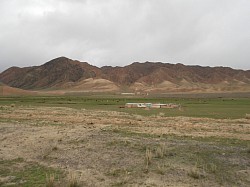 On the road to Bishkek, Kyrgyzstan 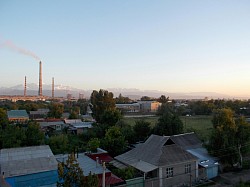 Bishkek, a stunning view of the mountains......except.. 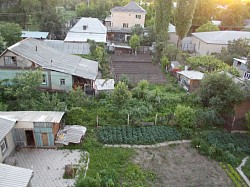 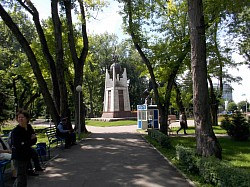 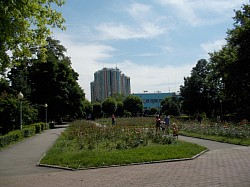 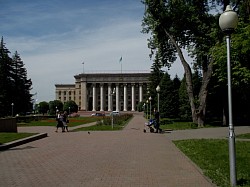 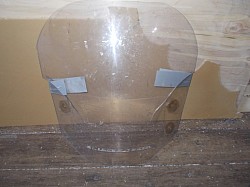 Time for a new windscreen 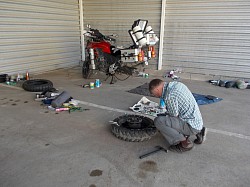 And a tyre change 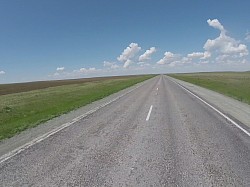 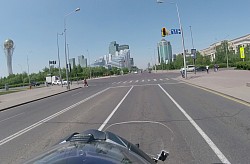 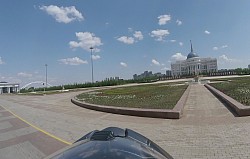 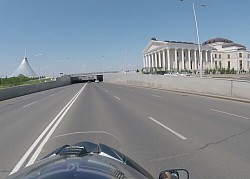 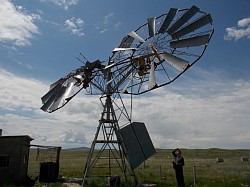 Not in working order, but didn't know 2 headed windmills existed! 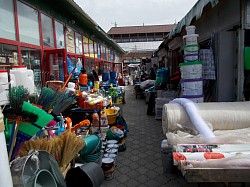 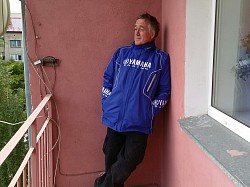