After the long day getting the bike we decided to have a rest day before heading off from KL. We returned the car in the afternoon and it started to rain as we rode off from the car rental place. Luckily it wasn’t too far back to the hotel, but we got drenched. Possibly the first of many times!

We rode through to Butterworth the first day. Lots of other bikers out and we got plenty of waves and toots, also lots of waves from people in cars. We crossed the border into Thailand on the 24th.

Leaving Malaysia we had to ride up a little alley way which we nearly missed. Dropped the bike turning round, luckily nothing more than a bruise, and perhaps more the ego than anything else!

It was quite straightforward leaving Malaysia, but took a good hour or more to get into Thailand. They used the carnet for all the information for the bike import, that was fine, but we then had to queue to get our passports stamped and had to complete more paperwork for the bike.

Only made it to Hat Yai that day and decided the next day would be a rest day.It was raining when we left Hat Yai on the Tuesday, so we got into wet weather gear, but it cleared almost as we left and turned into a great riding day. Long ride to Chumphon. Lots more small bikes in Thailand, and as we had noticed on previous visits, lots of utes!

Another long haul to Ratchaburi on Wednesday, lots of roadworks, good thing they don’t have 25km speed limits or we would never have got there! The road was pretty rough in places too.

Today we came from Ratchaburi to Nakhon Nayon. We had to cover extra km as bikes aren’t allowed on the toll roads. Also not supposed to be on some of the motorways we discovered when we were pulled over, but we didn’t see anything to tell us that. We were just told to get onto the frontage road. I think we went about 230 km in dense traffic often travelling at high speed, and I don’t think we left built up areas once.

We have had great riding weather the last few days, not too hot.

Tomorrow we plan to visit Khao Yai National Park as we have visited it previously and it is a nice ride through rain forest.

As we came closer to Cambodia we noticed that the driving seemed to get even crazier. People overtaking 3 deep and cutting in as soon as you left a safe distance in front.

We crossed the border into Cambodia on Sunday through Anlong Veng (Choam). We have crossed here before and it is usually very quiet, but today was a new market just across the border in Thailand so it was quite busy going the other way.

Our main holdup was organizing visas, I don’t think they deal much with foreigners needing visas, but eventually someone who knew what to do found the right forms and processed the visas, then it was simply a matter of being stamped in through immigration. I think the bike paperwork was going to be too much trouble for them so they just let us through “you must come back this way when you leave”! ….which we had planned to do anyway.

A few years ago we travelled the road from Siem Reap to Anlong Veng and it was excellent, but it has deteriorated quite quickly unfortunately. Still much better than the dreadful highway 6 from the busy Poipet crossing, with very little traffic.

We will spend a week  or so in Cambodia before crossing back into Thailand and on to Myanmar.

We left Cambodia early on the 8th. I think it must have been one of their coolest days ever! It was almost cold driving up through the hills to the Thai border.

We crossed again at Choam. It couldn't have been easier. No waiting, stamped out of Cambodia with no mention of the bike. A very streamlined process through the Thai immigration and customs, all in took probably 15 - 20 minutes or so and we were on our way. At the Southern border when we first entered Thailand they used our carnet for information, this time they used our South Australian registration paper.

Very picturesque ride coming down through the hills after crossing the border.And you notice a vast improvement in the roads and the cleanliness! Cambodia is so dirty compared to Thailand.

We ran into 4 English guys touring on hire bikes, it was good to compare travel stories.

Every where we go we get asked questions about the bike and the trip, and have well and truly lost count of how many times the bike has been photographed.

Stopped in Buriram for a day or so to get the bike serviced and checked over, then probably heading to Bangkok. 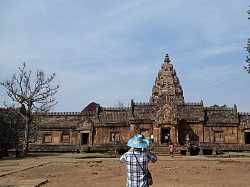 Stopped to see the old Khmer ruins at Phnom Rung. Similar to those in Cambodia, not nearly as big, but still really impressive and well worth the short detour.

Made it safely into Bangkok Friday morning. Traffic was heavy going but no real problems. Didn't get kicked off the motorways even though motorbikes aren't supposed to be allowed. Did manage to avoid the toll roads. Had to spend some time on the frontage roads.
Left Bangkok early Sunday morning hoping to beat the traffic, seemed heavy going anyway. It didn't help that the gps decided the middle of Bangkok was a time to go haywire, but somehow we found ourselves  on the right road.
Visited the Chai Nat bird park and decided to stay in Chai nat. Still tossing up how far north to go in Thailand before heading to Mae Sot Friday for the start of the Myanmar crossing on Saturday.
Vin and Mary Dowd