We crossed into Nepal, and while the road was a bit rough, we immediately noticed less traffic. We stopped the first night in Birtamode. We found this and subsequent cities in Nepal overall much cleaner than India. We were still surrounded every time we stopped though.

We travelled along the East-west Highway until the BP highway (06). The east west road is the main road across Nepal. It is quite a good road, two-way except in some towns, but the traffic is not too heavy. Of course you always have to be alert for buses stopping suddenly without warning, vehicles overtaking and motorbikes pulling out in front of you. We only travelled short distances each day and managed to look around a bit at a couple of towns.

As soon as we turned onto the BP highway we started climbing. After stopping the night at Kamalamai, a small town in the foothills which was really pleasant to just wander tnrough, we drove on a really impressive road up into the mountains, remarkable scenery and amazing to look back down on the road as it came up the mountain with hairpin turns. The road was quite good most of the way to Kathmandu, but deteriorated the last 50 or so km. We drove through mountains and often looked down over valleys with rivers running through them. We can only imagine how it would look in the wet season!

We stayed a few nights in Kathmandu, highly tourist orientated, lots of western food available. Riding the bike was interesting, the traffic was very heavy. We had to queue for petrol for about 20 minutes, the only time we queued in Nepal, although we saw many quite long petrol queues. Kathmandu is a busy city, unfortunately it suffers badly from air pollution, even more so than other parts of Nepal.

We rode next to Pokhara. The ride there was again very picturesque, very heavy traffic leaving Kathmandu, and a lot of buses on the road. Pokhara is situated on a lake, surrounded by mountains with the snow capped Annapurna mountains visible in the distance. Quite stunning. It is also filled with tourists, and again lots of western food and good coffee available.

We stayed a few days in Pokhara, Vin decided to give paragliding a go, Mary stayed firmly on the ground!

Then it was time to head west again. We made our way down to the east west road. It was again a beautiful ride through mountains for about 150km as we headed south to the flat country. We seemed to drop down forever, then suddenly we left the mountains behind us as we arrived in Butwal.

We headed west across Nepal. At times we went through hills and skirted national parks. Very different to the dramatic scenery of the mountains, but quite picturesque. We were even able to stop occasionally for a break without dozens of people surrounding us!

We saw warning signs about different animals but only saw monkeys and deer like creatures.We passed through small villages with mud brick homes and thatched roofs. We noticed a lot more bullock drawn drays and ploughs than in eastern Nepal.

We pulled off the road once where it looked quiet and quickly found ourselves surrounded by school children. A couple of the older ones spoke English, and asked us to visit their school, so we dropped in and talked to the teachers and children for a bit.

As we went further west and closer to the Indian border we started seeing small horse drawn vehicles as well as bullock drawn carts. The west seems quite fertile, there is a lot of wheat growing as well as some corn, sugar  cane and bananas.

We left Nepal at Bhimdatta. We nearly missed both customs and immigration, we were both watching the long line of horse drawn vehicles, but the sudden end to the bitumen road was fair warning. There was no waiting at immigration and customs was quite quick. Then we had to ride on a rough track to the Indian entry point. We were a bit sorry to be leaving Nepal but had to keep moving. 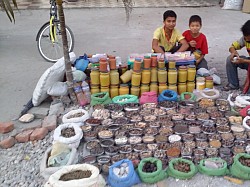 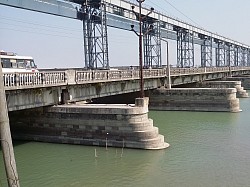 Huge weir, lots of water to hold back I guess 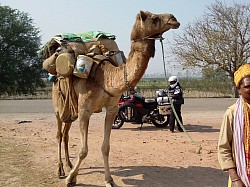 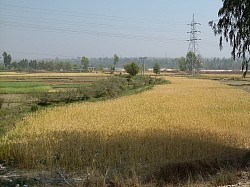 For some reason we weren't expecting wheat. 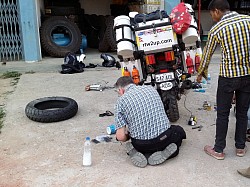 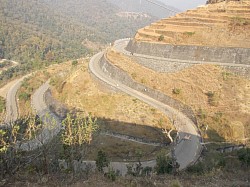 BP highway, on the way to Kathmandu 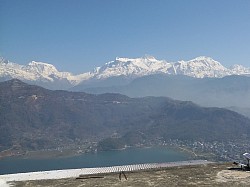 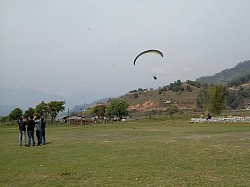 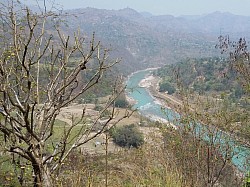 The river did look this blue 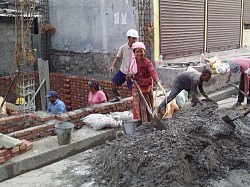 Hard at it, both men and women 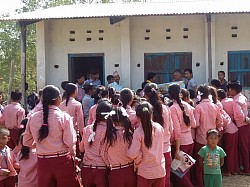 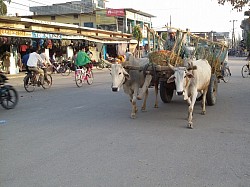 A common sight in the west of Nepal,
Vin and Mary Dowd