The day before the road opened we received notification from the guide that there would be a delay in our permits. Till that point he had said we had until May 3rd to enter, now we were advised that we could not enter with the bike that day as it was the day our permit expired. He advised our bike would need to be held in  customs until our permit was approved, 2 or 3 days. We considered staying in Pakistan a few more days, but decided it would be best to get through the pass before something else went wrong.

The KKH goes approximately 80 km through the Kunjerab pass to the Pakistan border then 120 km to Tashkorgan in China where customs is based.

We arrived at immigration and customs in Sost about 8.30 and waited until 9.00 for them to open. Customs did the paperwork and signed off the carnet. Shortly after, “anti narcotics” advised they wanted to check us. They went through the panniers and top box, asked what was in the aluminium tubes and then we were able to go through immigration.

After leaving Sost it is still 80km to the border. We were waved through the first police check when we said we were going to China. We were aware we had to pay to go through the National Park so were expecting that checkpoint. We chatted for a bit, had a coffee and got rugged up with layers of clothes ready for the cold ahead. On the bike and rode all of 100 metres  and there was another checkpoint. Off the bike, helmets off, passports out again and unbelievably another photograph. Vin told them what he thought then tried to explain how frustrating it was and how bad for tourism, but all we got was the usual “its for your security”.

At least it keeps the employment in Pakistan up, pity they weren’t employed fixing the roads after the landslides as 2km on we got a puncture from a sharp stone shard. It destroyed the rear tyre which had only done about 1200km. It took well over an hour to change the tyre with some assistance from a park ranger who wandered by and then some passing locals who also had a flat tyre which Vin fixed as well. Hard going at 3500 metres altitude.

We got going again and all was good for the next 45 km, the landslides had been reasonably well cleared and the road was good with only the occasional icy bits to worry about. We climbed up through the pass and gradually came on more and more ice and snow until we were driving in tyre tracks that cars had made in the snow. A car in front was stuck and had to back out. There was a police vehicle and a “VIP” vehicle behind us trying to pass (and unbelievably expecting us to pull over!!), and the car whose tyre Vin repaired in front. I got off to walk not knowing how far the road was like this, the boys in the car helped Vin while the police car and VIP car followed. Eventually we worked out it would be like this for about 4km. The VIP car gave me a lift to the border while 2 of the lads in the car walked through helping Vin when needed, repaying the favour of mending their tyre tenfold! The pictures below don't show the worst of the snow, it got much deeper and harder going. They all arrived at the border about an hour or more later. Vin was exhausted but still managed to celebrate crossing the border (see pic below)!

A quick stop to recuperate, chat to some Chinese who had come up to see the border, many photos and a final thank you to our helpers and it was a brief ride down to the first Chinese immigration check point. It was now about 6.30 pm China time and we still had 120 km to ride and were concerned about running out of daylight, not to mention getting down from the altitude and cold.

Immigration went through all of our luggage and insisted on scanning everything, this took nearly an hour as we insisted on doing each pannier and the top box separately, and packing it all back in takes time and strategic placement. Then they made us wait at least another hour checking something out as our bike permits had expired. Eventually our patience ran out, and a bit of anger seemed to speed things up! Finally as the cold really set in and with the light fading we were given the ok to go, with the comment “please drive safely” and some sort of apology for the holdup.

I questioned the state of the road “good” (it was) and enquired about any animals as it was getting dark “no animals”…well not unless you think cows, sheep and camels are animals I guess! We did make good time, only seeing about 10 vehicles the whole way. We were stopped at a military check point about 10km from Tashkurgan just as it got dark. The military were obviously waiting for us as they escorted us to immigration. There seemed to be some discussion about the time taken to get there, perhaps it was a good thing we don’t speak Chinese and none of them spoke more than a couple of words of English.

We were taken in the dark to the immigration and customs. First they sprayed the bike – quarantine, no idea what they used but it cost us $5US. Then we were relatively quickly processed through immigration then a discussion about scanning our bags at customs. We were about to get our luggage when they decided not to bother as the bike was going to a customs lockup. We rode to the lockup and were advised to take only the bare necessities, which to us was several bags. Customs then drove us to our hotel, it was midnight local time when we checked in. To really top the day off, when we checked our photos, we found many of them had not taken, not sure if the sd card was faulty or what, but we don't have several pics of the Kunjurab pass and the border unfortunately. I guess it is lucky we don't rely on just one camera!

Next day we returned to check and cover the bike and get a few more things. We were advised to move the bike to a locked shed. Two days later we returned to get a few more things from the bike, nothing had been checked by customs. 2 or 3 days blew out to 9 days. We had already ridden 125km in China and only had about 450km till we exited, but couldn't move without Chinese number plates, customs clearance and local permits.

Our guide suggested we go to Kashgar by car and return to Tashkurgan when the permits were completed. We spent 4 days in Kashgar before  being advised the permits were ready. We left for Tashkurgan at 8pm and arrived at 3.30 am. We had already  discovered on the trip to Kashgar that the 300km trip took at least 5 hours, due partly to 80 km of 60km/hr speed limit, with speed cameras every few km, but mostly due to 100km of the worst road we have been on. It is all road works and eventually will be a super highway with massive bridges....but not yet! Unfortunately our driver broke all records for how slow to drive, I doubt we went over 60 km the whole 300km!

We picked up the bike next day without too much drama, and without customs ever checking anything except paperwork, and left Tashkurgan at 1.15. The first 130km is a very good road. I decided to bail after that and got back in the car with the guide. Vin was then able to get through the rough much quicker. It was a terrible day, the road is dusty at best, but this day there was firstly a dust storm, then rain! We all eventually made it back to Kashgar about 8pm. At some point we questioned the guide on whether we could go to Kyrgyzstan the next day, only to be told we did not have exit permits! Another 5 day wait and we were eventually able to leave China. Our 7 day transit had taken 15 days, cost an extra $500US, much anxiety, and we did not receive any sort of apology from the guide. To add final insult to injury, as we were sitting freezing at the final China / Kyrgyzstan check point, he told us if Vin wanted his Chinese driving permit it would cost 150 Chinese yuan....after we had spent $1000's with the company and been totally stuffed around!!

On the plus side we did see more of Tashkurgan and Kashgar, and did enjoy the Uyger food! 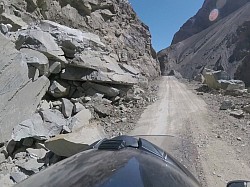 One of many cleared landslides 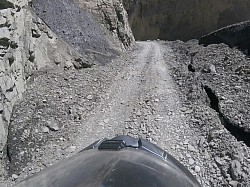 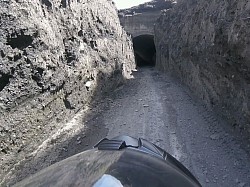 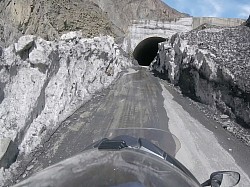 Glacier around another tunnel entrance 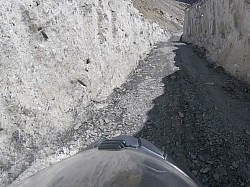 Out of the tunnel through the cleared glacier 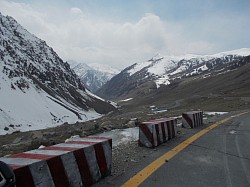 Looking back over Kunjarab NP 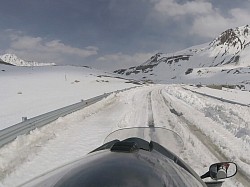 Riding in the tyre tracks. About 4 km to the border 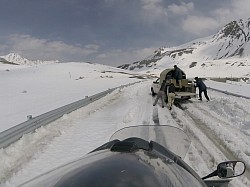 The police car doing it tough! 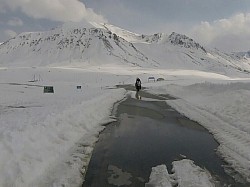 He made it finally! 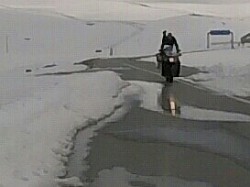 ...and celebrated doing a "Drew" (sorry about the quality). 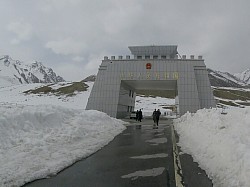 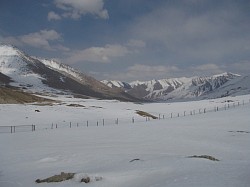 The border fence...it goes about 100 metres
Vin and Mary Dowd