We crossed into Myanmar on Saturday morning at the MaeSot , Myawaddy crossing. We met up with 6 other bikers for the tour across Myanmar. We used Burma Senses as our tour company. It is not possible to cross Myanmar without an official tour.

We checked out of Thailand quite quickly, rode across the bridge, changing sides to the right midway and were met at the Myanmar border by our guide Phyo. We completed a bit of paperwork, but spent a good deal of time standing around waiting while Phyo sorted out things. We were issued with temporary registrations which were taped on to the bikes.

We eventually got on the way. The first 35 km were good going on the new road, but things got slower after that. Eventually  arrived at a hotel near “Golden Rock”.

Next morning we all got on the back of a truck with about 50 people for the trip up the hill to Golden Rock. This was the first of several temples we were to visit. Apparently this is one of 3 temples all Burmese Buddhists must visit annually, and being a Sunday and good weather it was very busy. The rock sits on the edge of a hill and people put gold leaf on it. It is currently undergoing some maintenance.

It was late morning before we left the hotel and headed off towards the new capital city Naypyidaw After a couple of hours we joined the main highway which was a long straight asphalt road, double laned with  very little traffic. We rode a couple of hundred km, stopping only for the toll stops which only seemed to affect cars. Eventually got into Naypyidaw on dusk.

Next day we rode under police escort to see the white (albino) elephants and visit another temple which I think is a replica of one in the old capital Yangon. Highlight was riding along an eight lane road at 9am on a Monday morning with police escort front and rear and virtually no other traffic! We would have loved to spend more time there just because it was so unusual, but unfortunately we had to move on.

We rode to Bagan, the ancient capital. There are many ancient temples, quite an interesting place to visit. I believe the temples are about 1000 years old. We were up early the next morning for sunrise. It just happened there was a motorbike show on in Bagan at the time, and as the rest of the group were keen to visit we spent some time there. Amazing to see so many big bikes in Myanmar.

Then we visited the local market, another temple and then a workshop where they made bowls and small ornaments out of bamboo covered with resin. Last stop for the day was a boat ride on the Irrawaddy River to see the sunset.

Next day we rode to Mandalay. Stopped to see what we were told is the longest wooden bridge in the world. It is a walking bridge over the Irrawaddy. Built over 100 years ago and quite a tourist attraction. We spent a day in Mandalay, more temples, visited a cotton and silk making workshop, and an opportunity to do a bit of shopping in a western style supermarket. Also found a great coffee shop!

Next day was a fairly short ride and an overnight stop before a long ride through the hills towards the border. We were treated to a feast for lunch, Myanmar style. Some interesting scenery on the way. A bit dry and dusty as it was the dry season.

The roads in the west were quite narrow, bumpy in places but reasonably well maintained. We didn’t enjoy the multiple rail crossings, and particularly didn’t like the one bridge where the railway line ran down the middle, as we went arse-up!

We found Burmese drivers to be more courteous than Thais and Cambodians. They don’t overtake into oncoming traffic and give motorbikes some respect on the road.

As we went further west we saw a lot more agrarian style living, many bullock drawn drays and ploughs, and very few tractors.

We were accompanied the entire trip by a government official, and at the tourist spots we were met by tourist police. In addition  I understand our guide was reporting to the police regularly by phone.

It was nice not to worry about planning routes and where to stop, and it was great having an interpreter everywhere, especially when it came to getting food in the more isolated villages, but we did miss some photos, and missed being able to just stop and look when we wanted.

It was good travelling with the “boys”, even if we did struggle to keep up with their pace at times, especially the late drinking sessions! It’s great to see young people getting out to see how the rest of the world lives! 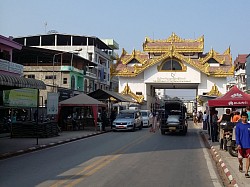 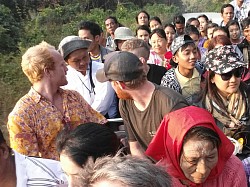 up the mountain on a truck 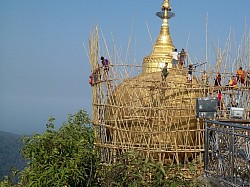 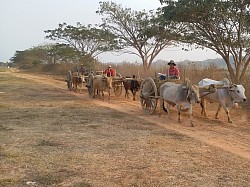 just beside the dual highway to the capital 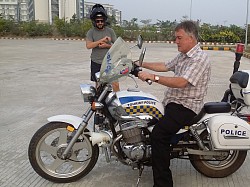 checking out the police bike 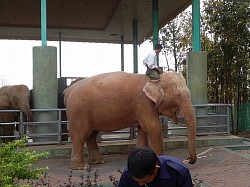 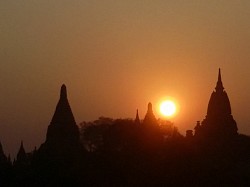 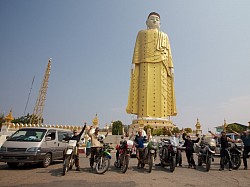 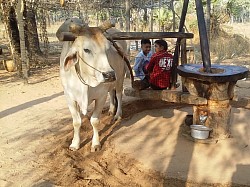