The decision to send the bike home by ship was based purely on economics, we couldn’t justify the extra thousands to fly it home.

We decided to use a local Chilean couple whom we had been referred to by an Australian freight company. We also had read of Martina and Enzo on Horizons Unlimited, the website “bible” for touring motorcyclists.

We had to take the bike to Valparaiso, about 120km from Santiago, but an easy freeway ride.

We eventually found Martina and Enzo’s home, where we met in 2 days, bikers from Germany, Norway & New Zealand, and a couple from Switzerland about to set off in a 4 wheel drive for a year. We spent the morning washing the bike in preparation for entry to Australia. We had decided to send most of our gear with the bike so had already gone over that thoroughly, and packed the panniers in readiness.

Early next morning we rode to the port, and with Enzo, his son and a worker, assembled the crate and packed the bike. Then it was about an hours wait to deal with some paperwork and we were suddenly bike less.

The plan was for the bike to be shipped a couple of days later, but due to a Chilean customs strike the shipment was delayed a fortnight. We had to leave Chile before the bike which was something we were very reluctant to do. We have been informed that the bike is now on board ship, bound for South Australia via Hong Kong, it should take about 9 weeks.

Apart from the wait caused by the strike it was pretty straight forward, Martina speaks several languages and manages the paperwork, Enzo speaks good English and seems to know everyone in Valparaiso, especially everyone necessary when it comes to freighting motorbikes!

So now it is just play the waiting game for a couple of months and hope all arrives intact! 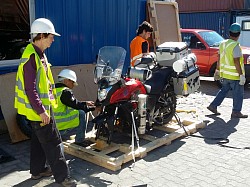 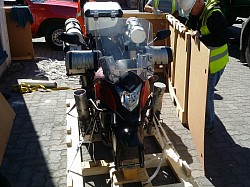 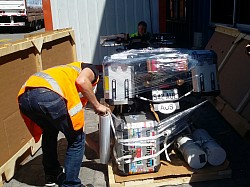 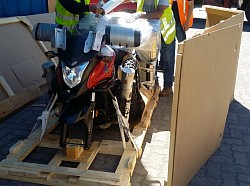 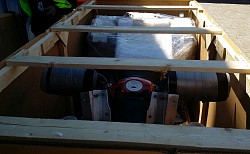 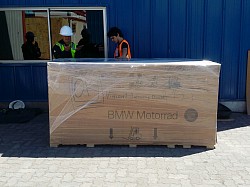