It was in November 2014 I put it to my wife that if we were going to go around the world on a motorbike we do it sooner rather than later. For some time we had been considering such a trip a little later in life when Mary retired. But hell might freeze over by then and it might never happen. She agreed to ask her boss if she could have a year off, and it was granted. the planning started right there and then. Knowing the complexities involved organizing such a trip as I had been reading forums and blogs for some time dreaming of such an adventure.

The shear volume of  things to do can be a bit daunting. First we decided that camping where possible was a must due to finance. I spent hours upon hours searching the net for the best possible camping gear, it all needed to be compact and light weight. The tent not only needed to be compact but large enough to be comfortable in and above all simple and fast to erect, final choice Wickiup4.

Bedding, I settled on Thermarest NeoAir All Season inflatable mats, they were a little wider than most so that was a bonus. I am not a fan of sleeping bags, have done lots of camping over the years and have never slept well in a bag. For this marathon trip we will try synthetic blankets, and artificial silk sheets, A double bed synthetic blanket compresses quite small in a compression sack! (See pic). Two blankets and art silk sheets in all take up less space than sleeping bags for the same warmth, as well it gives the option to regulate how much cover you actually need, one blanket or two. I will give a final review on how this works out at the end of our journey! 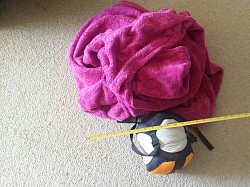 One blanket out, amazing how they compress! 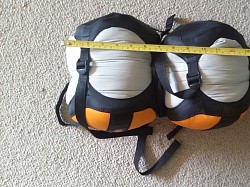 They get down pretty small! 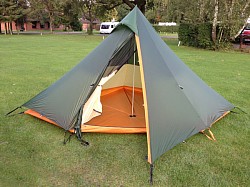 The Wickiup4
Vin and Mary Dowd