Argentina…..dogs, terrible breakfasts, too many police checks and more trouble with ATM’s than anywhere else in the world. But you could always get a reasonable cup of coffee!

The border crossing into Argentina started well. After initially being directed to one line, and several  minutes later after querying that perhaps we were in the wrong line, we were redirected to the vacant Bolivian immigration to get stamped out. Across the road to get the customs exit done and then back to the original line which was for Argentinian immigration. The long line moved quickly, we showed our “reciprocal fee” receipt, a few questions and we were stamped in. All good so far. Then it was off to customs where we were advised we had to catch a taxi into the town to organise insurance. Hmm, first problem …no money. Back to Bolivia to change the last of our Bolivianos (no currency exchange on the Argentinian side), and we were assured by the customs man we would have enough to cover the taxi and the insurance.

Off in the taxi to the insurance office where we found the customs man was out in his estimate by quite a bit. Back in the taxi to one of only 2 ATM’s in town and join the long queue, eventually we made it back to customs, paperwork done and off to our first stop. Initially we were surprised as we didn’t notice much change from Bolivia, that was to come though as we moved south to Jujay  and out of the Andes for the first time in weeks, and then headed across Argentina to the east.

We did some long days across long straight roads as we were keen to get to Chile and organise returning home . Travel was easy, not too much traffic, fuel stops as needed, each with food and coffee. The country was dead flat, such a change from what we had been through in Peru and Bolivia. It was also very wet, with water lying in the paddocks, and cows standing in water!

We headed up to Iguazu Falls. A beautiful place, well worth the drive across the continent! We experienced the hottest days we had had in South America, even though we were now south of the Tropic of Capricorn.

From there we made our way south through ever changing country. Dense tropical forest gave way to farming country as we headed towards Buenos Aires. Not really wanting to visit yet another huge city we headed west towards Mendoza, the wine growing region of Argentina, set in the foothills of the Andes. Picturesque country with snow capped Andes as the back drop.

From Mendoza it was up into the mountains one last time as we crossed to Chile through the mountain pass, Los Libertadores.

We passed through quite rich agricultural areas as we came across Argentina. The rural areas seem quite developed, and the cities quite affluent. Every city had numerous large supermarkets and malls, streets were clean and housing looked comfortable. At one stage we drove at least 100km along a rural freeway with painted light posts lining the middle!

People were always friendly and polite, drivers were courteous, and we found there was a reasonable amount of English spoken.

We noticed a massive police presence though. Some days we were stopped several times for “checks”, but usually “no Spanish”, got us a wave through.

For some reason we had problems with ATM’s, often having to try 3 or 4 before getting our money, we never worked out the problem though.

Our biggest problem in Argentina was dogs! They are everywhere, and aren’t always friendly, quite often running out at the bike with some pretty sharp teeth showing!

And our other problem….petrol pump attendants who invariably wouldn’t fill the tank. Generally they left it 2 or 3 litres short, pretty frustrating when you are trying to get maximum distance between stops! 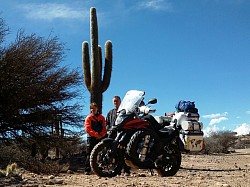 Coming out of the Andes, huge cactus plants in the north west of Argentina 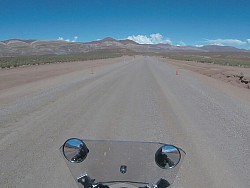 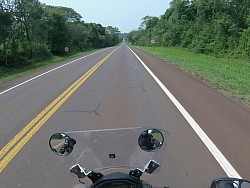 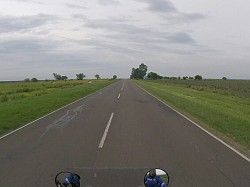 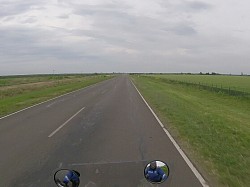 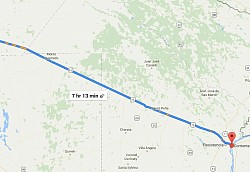 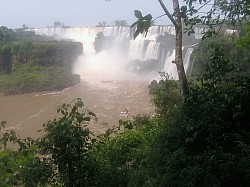 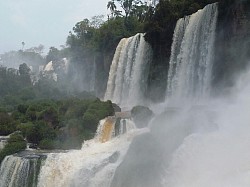 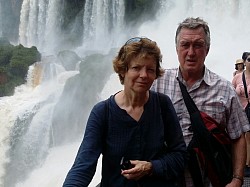 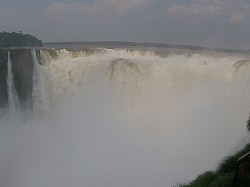 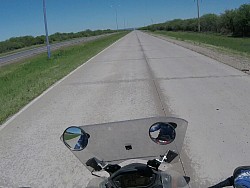 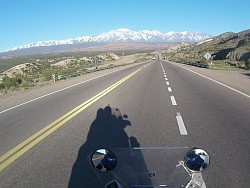 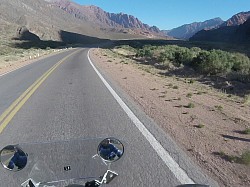 Into the mountains
Vin and Mary Dowd