We flew to Bogota via Madrid. The plane from London was quite late so we had to rush to get the connecting flight. We arrived in Bogota just on dark after about 13 hrs flying. We had packed our topbox in one carton and packed a few other things in another carton which we sent as checked luggage. After waiting until all the luggage was definitely out, we realised that the carton containing our topbox had not arrived. We spent an anxious 24 hours before we got a call to say our luggage had arrived and was being delivered. Not sure whether we more worried about the prospect of having to get a new top box and contents or losing all our flag stickers!

We had decided to hire a car as we were without the bike for a few days, perhaps not the best idea after a long flight! Bogota is a city of over 8 million people. Despite overpasses, bus lanes, cycle lanes and wide streets they have major traffic problems. We picked up the hire car and without really thinking about it accepted a manual gear change. Oops, gear stick is on the right! Made it safely through chaos to our hotel though.

We spent a couple of days looking around Bogota, it ranges from the very affluent to quite poor living in places. There is a lot of graffiti, which is common, and even encouraged, in many places in South America. Central Bogota on a Sunday is festival like. The streets are closed to traffic, families come in to the centre and there is a lot of street entertainment, ranging from musical groups to portrait painting to guinea pig racing!

Our bike arrived in Bogota sometime over the weekend and we spent Monday collecting the bike. First stop was the office of the freight forwarder, then after dropping our hire car and getting a bite to eat we were to meet the agent at the airport. Several wrong gates later we eventually found him. To cut a long story short, about 6 hours later we had our bike! And that was after having to remove the panniers and spare tyres so we could get it out of the warehouse via an access door and down a dozen steps!

We needed to organise insurance, but it was after 6 when we finally left the airport on the bike so we had to organise to come back the next day. Again we rode through the crazy streets of Bogota on dark in peak hour traffic. Much of the trip was done at no better than walking pace.

We spent 6 nights in Bogota, much of it getting the bike sorted again ready to go on with our trip.

We travelled west through the mountains to the city of Armenia. Much of the trip was on a new dual highway, arguably the best roads we have been on anywhere! The last 100km or so to Armenia was two way road, slow and windy, the road surface was good though, and there is a huge amount of road works going on where they are obviously planning a dual highway with tunnels and high bridges.

Armenia like other cities in Colombia is clearly developing fast. There are lots of new commercial buildings and housing estates.

From Armenia we headed south to Popayan. We drove firstly through sugar cane growing areas in the valley, passing four and five trailer sugar cane trucks, then closer to Popayan we went back into the mountains. The road through the mountains is good, very windy with switchbacks, slow going at times, but amazing scenery.

Popayan is an interesting old city with white buildings through the old town, and of course another town centre complete with entertainment. From there it was further south through more mountains and valleys to the city of Pasto. An overnight stop in Pasto and then it was south to the border with Ecuator and our first land crossing in South America,  which was relatively smooth. Hand in the customs paperwork, queue to get stamped out of Colombia, but much quicker to get stamped into Ecuador, then a bit of paperwork to get the bike in. At a guess we probably spent less than an hour at the border.

Most of our time in Colombia was spent in the highlands where the weather is cool at night and warm in the day. There are a few rainy months, but it is just about close to perfect weather! Most of the country we drove through was mountainous, the scenery is spectacular and ranges from lush but rugged, to harsh and dry, to cool (in fact cold), green, dairy grazing country. We were amazed at some of the terracing in the mountains. The valleys are more tropical, with sugar cane, bananas and papayas as well as citrus growing.

Colombia is a developing country, most of its political turmoil seems to be behind it and they have obviously worked hard to improve security and safety. The people are a mix of Spanish descendents, native South Americans and other races. Of course Spanish is the main language, but we found quite a lot of people who could speak some English, even in the smaller towns. Regardless, we have as always found people try to help us, and try to understand what we want.

All the towns we visited have a centre square where people tend to congregate and invariably someone is singing or playing a musical instrument. Begging is not common but does exist. There is a strong police presence, but you still need to be very aware of your belongings. We also noticed military in places on the side of the road, their sole purpose seemed to be to give a thumbs-up to every vehicle that drove past, so we figured we were safe....sort of! 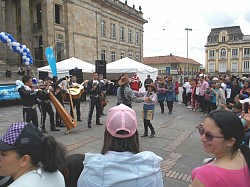 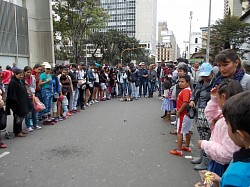 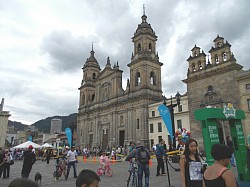 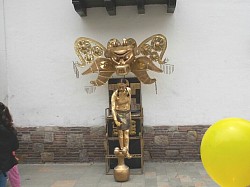 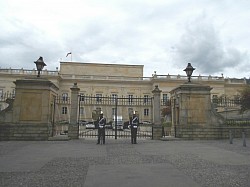 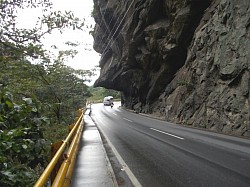 On the road from Bogota to Armenia 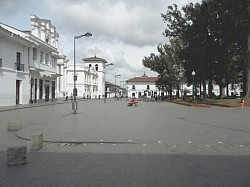 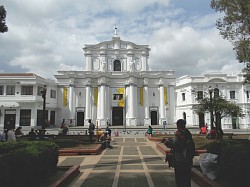 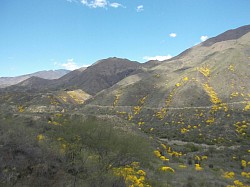 Images of the Andes 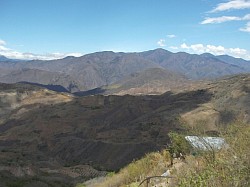 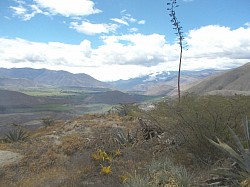 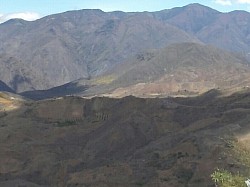