We eventually found our way into India, our bike was too big for the small open gates, so we had to wait twice for someone to come and open the large gates. Not sure if we missed something,  but there is no way you could cross that border by car!

Then it was back into the chaos. Unfortunately our bike is a few cm wider than Vin realised, and the pannier hit a truck and came off…as did we when the bike went down! A bit of engineering work with a hammer, surrounded by onlookers of course, and the pannier was usable again. It is now strapped on temporarily. No other damage thankfully.

We soon discovered it was the Holi Festival. If people want to go crazy, burn sugar cane, spray each other with iridescent colours and throw buckets of coloured water on each other, fine. We just got a bit tired of them doing it to us, unlike them we are not wearing throw away clothes, and the stain doesn’t wash out. It also wasn’t pleasant having to ride in wet clothes, even though they dried quickly in the warm weather.

We wanted to visit the Jim Corbett National Park, but weren’t allowed in on a motorbike as we were told it was not safe. Later we read that a ranger had been killed by a tiger the previous day.We had trouble finding accommodation, presumably due to the festival, and ended up in Kotdwara, where the hotel owner advised us to keep off the road until after the festival. As Vin suddenly came down with gastro this wasn’t hard.

As our hotel was on the main road we were able to witness some of the celebrations for Holi. It is best described as mostly young adult males riding often 3 to a motorbike up and down the street covered in pink dye. Younger boys gathered to spray each other and passers-by with colours, and older males smeared colour on each others face. I don’t recall seeing any females involved, and there were very few if any cars on the road. About 4pm, other people started venturing out, cars started appearing and a sense of (Indian) normality returned.

Next day was Good Friday and we heard hymns being sung from the nearby cathedral! The strangest sight was a procession of Catholics coming down the street carrying a large cross in the middle of the normal chaos of an Indian city street, including cows on the road.

The view to the mountains was quite spectacular and we had planned to drive the long way through the hills heading west, but spent longer than we expected in Kotdwana so ended up going an easier route.  We spent a night in Paonta Sahib, we were quite near the mountains and while most of the road was through cities, towns and villages, there was some forested areas.

We had tried to get some bike parts in India but in the end organised for them to be shipped from Australia. (Thanks Jeff). We organised to stay a week in Ludhiana in Punjab, NW India as we didn’t know how long the shipment would take. Our route still took us through forests and hills. We drove through some of the prettiest scenery we have seen in India. Green fertile valleys surrounded by hills. The road through the hills was a bit bumpy, but not too much traffic. Unfortunately the mountains in the distance were hard to see due to the smoke haze. Eventually we came out on the highway and had a relatively easy run into Ludhiana, complete with roadside stop where we had to choose between Subway, Maccas and Burger King!

Ludhiana in the northwestern state of Punjab is a big city. We found lots of upmarket malls and shops and plenty of cafes and restaurants, it was overall cleaner than a lot of cities. The traffic is still crazy though. Often we were told that the locals prided themselves on their hospitality, and we met many examples of this. I guess we stood out not only for the bike, but in our entire week we didn’t see another Westerner. If we looked lost (stopped for a moment to study the gps), someone would invariably stop to see if we needed directions. A chance meeting on a corner led to us being taken out to dinner by the Punjab Enfield motorcycle club, they also found  a garage so Vin could work on his bike. Other’s went out of their way- Davinder organised a haircut and bike wash, we were taken a couple of times for coffee, we even had a random guy on the street go off to buy a fuse we needed.

We were feeling pretty jaded by the time we got to Ludhiana, so all the hospitality was a welcome relief if at times a little overwhelming. On balance though, unfortunately the most impact was the way people drive!

To date, collectively Indians are the most impatient, self-centred, undisciplined drivers we have come across. It is as if each individual has more rights than the rest of the road users, they show no respect to each other. We have been pushed aside by oncoming cars, we have sat in congested traffic waiting for traffic lights to change and been surrounded by people tooting their horns, with absolutely no where to go and nothing to achieve from it. It is just push your way through, and too bad if you get in the way. In one day in 150km we witnessed five serious vehicle accidents, one was a tipped over truck carrying a score of people who got flung across the road down an embankment and into the on coming traffic! And this was on a three lane highway! Cars and buses pull up in the middle of the road without warning. People cut in front of you, you can’t leave a safe distance between you and the vehicle in front because  you will either be tail-gated, tooted at or simply cut in on. It is hard to believe these are the same people who go out of their way to help you!

This is the toned down version of Indian driving, I wouldn’t let Vin publish his version!! 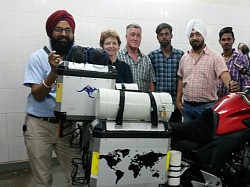 Davinder on the left took us to have the bike washed 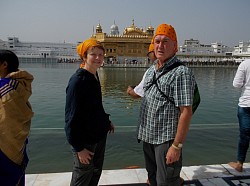 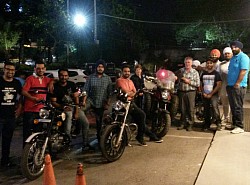 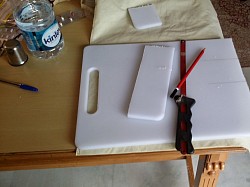 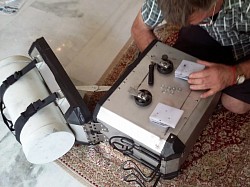 It will do the trick!
Vin and Mary Dowd