Ireland and the UK

We arrived in Ireland after a 17 hour ferry ride to a damp welcome, and that was Ireland for the rest of our stay! We were amazed how many motorbikes are on the roads in Ireland, especially considering it rains every single day! Maybe that’s an exaggeration, there was one day in the ten days we were in Ireland that it didn’t rain. Despite that it is a beautiful country and the people love to stop and chat.

As always everyone had a “must see” for us, and ok course there is no way to see everything. While wandering through Cork we stopped and had many conversations, we spent some time talking to a young guy originally from Italy who shouted us a coffee. I’m embarrassed to admit we didn’t get his name, but hopefully we encouraged him to get on his bike and travel.

We stayed a few days in Cork then took the coastal route via Baltimore and Bantry to Tralee. We avoided the motorways and drove for miles along winding roads lined with hedgerows.

I’m not sure if the Irish are officially the most courteous road users on the planet, but they are certainly the best we have found. European drivers are good, but the Irish generally were fantastic. They seem to be very “bike aware”, will move over to let you pass when possible, great place to ride….except for the rain!

We thought disaster had hit when we discovered a broken bolt in the engine mount. We were directed to see Neil at Donemark motors near Bantry. He gave us a corner to work on the bike, lent us tools, did some of the work himself, and 3 hours later we were on the road again. Neil refused to take anything from us, again renewing our belief that 99% of people are generous spirited. Unfortunately we didn’t get his surname, so Neil if you read this, again please accept our thanks.

We went to Dingle to visit our friend Bernie Smith’s home town and meet her brother. Unfortunately the weather was particularly bad that day, so the views weren’t so good. Again we met with Irish hospitality with John buying coffee and scones.

Ireland in their so-called summer is very touristy, and accommodation is very expensive so we avoided Dublin. We drove through the midlands which again we found very picturesque with emerald fields, rolling hills, pretty valleys and small villages. We had put Cavan on the must see list as we were told it was were the Dowds originated from. The delightful Una from our b&b informed us Dowd was a common name in the area so decided against looking for relatives.... we have a trip to finish by Christmas!

We often talked of how hard it must have been for those early immigrants,coming from the green fields of Ireland to the harshness of Australia…..although personally I think it must have been a relief to go more than 24 hours without rain!

We crossed into Northern Ireland and the only identifiers were the road signs changing from km to mph, and masses of union jack flags. A drive through Belfast showed us that there are still simmering tensions in Northern Ireland, a nice city, but the divide still exists.

From Northern Ireland it was the ferry across to Scotland. We left Ireland in the rain, and left the rain behind for a bit.

One of the first signs we saw on entering Scotland… “allow motorbikes to pass safely”….welcome to Scotland! Our quick trip through Scotland left us again thinking we had made the wrong choice, the country looked beautiful, but we had made plans to go south, and the rain was getting a bit much!

We came on the motorway just as we entered England, the patched up windscreen caught a gust of wind from a passing truck and suddenly we had another big crack through the windscreen. Luckily we were only a short distance from Carlisle where we planned to spend a couple of days. We passed by Lloyd Honda and stopped in to discuss our options on a new windscreen.

Anthony, Tony and the rest of the team at Lloyd Honda where amazing. They taped up the screen so we could safely ride, made us a coffee, listened to our stories and studied the bike. They suggested we should get a new windscreen custom made (like the previous two), rather than buy a stock windscreen. The next day they organised for us to see Joe at Sign I.T a few miles away, and a few hours later we were the proud owners of a nice new windscreen. Joe was fantastic, refusing to accept payment and eventually only taking some beer money. Carlisle is up there next to Northern Pakistan on our list of most friendly and helpful people!

Unfortunately we ran into northern English weather, and spent a wet afternoon visiting Hadrians Wall near Carlisle. Hadrians Wall was built in the Roman times and ran from coast to coast, over 100kms. It was built of stone up to 3 metres wide and 5 metres high. Much of the stone has been removed over the years, but its amazing to see something built 2000 years ago.

Next day we spent a pleasant day driving through the lakes district to Lancaster and Morecambe, on the west coast. We were intrigued by the massive tides at Morecambe, approximately 9 metre tides, water lapping the beach and a few hours later nothing but mud flats!

We headed across England to the east coast. Nice drive across, and a quick look at an unusual beachside resort town called Skegness. Then we made our way back across to the west, a drive through southern Wales, and down to Plymouth and Tourkey. We stopped at Bristol for a new spare front tyre and air filter in preparation for South America.

We did a quick trip to the Isle of Wight, which does have some pretty spectacular coastal cliffs. We stopped at Shanklin and as it happened the local bikers all meet there every Wednesday so we spent some time talking to local enthusiasts and looking at bikes of every make, size and vintage.

Then a couple of days in London, we had a ride around to see a few sights, joined the masses to visit the museum and a quick stop by Buckingham Palace for a pic, unfortunately in the rain again! We were greeted by a very pleasant policeman who chatted for a bit about the bike and then advised us to only stop a short time for a photo as we really shouldn’t be there on a motorbike. We figure if the bike fits it goes!

We also had a chat to a guy who informed us he was a coachman for the Queen, saw a few pictures of him on horseback and he explained the different carriages, protocols and dress.

We decided to do a trip to Brighton and ran into quite a storm, the wind was so strong it was difficult to keep the bike upright, not a good day for a trip to the beach.

England has generally been pretty, unfortunately lots of views are concealed by the miles of hedgerows when we drive along narrow winding roads, and otherwise we are on motorways!

We have been amazed by the number of motorbikes on the roads in the UK, especially considering the weather here. The UK is bike friendly, with areas for parking, and an acceptance by car drivers that bikes will “lane split”, and where possible, cars moving aside in slow moving traffic to let you through, unlike the anti-bike sentiment found in Australia.

For all that though, overall we haven’t found the English friendly. Not to say we haven’t met some lovely people, we have had many car park chats and some (unfortunately not all) hotel and guest house proprietors have been really pleasant, and we have even had a few offers of accommodation, but rather than the waves and thumbs up we were getting in Europe and Ireland, here other bikers give a very reserved head nod as you pass. They are much less likely to strike up a conversation, even though our bike is clearly being discussed by others!

We dropped the bike at Moto Freight on the 22nd waiting to be sent to Colombia and we have a couple of bikeless days before heading to Bogota on the 26th and hopefully collecting the bike safely at the other end!

Approximately 27,000km (forgot to read the speedo before it got shipped), 7 months and we're still talking to each other!! 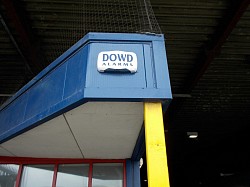 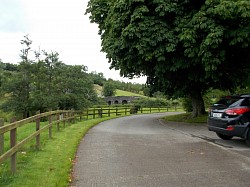 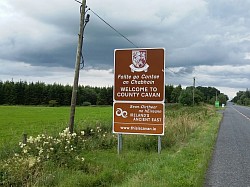 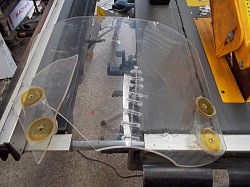 another windscreen bites the dust! 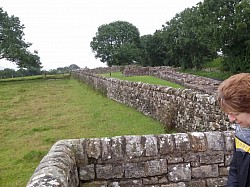 Best we could get in the rain, Hadrians wall 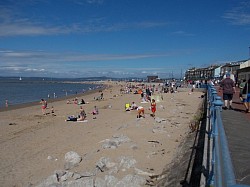 Morecambe beach with tide in 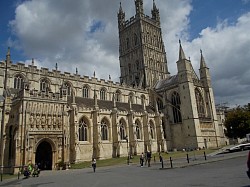 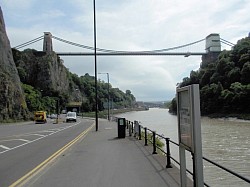 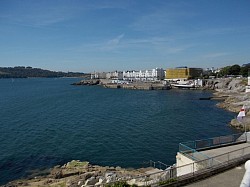 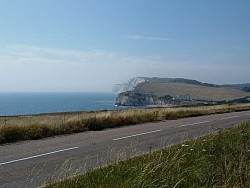 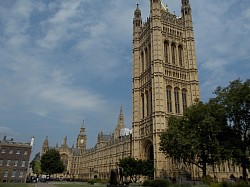 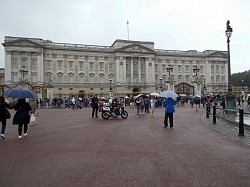 Chatting to a nice policeman at the Queen's cottage 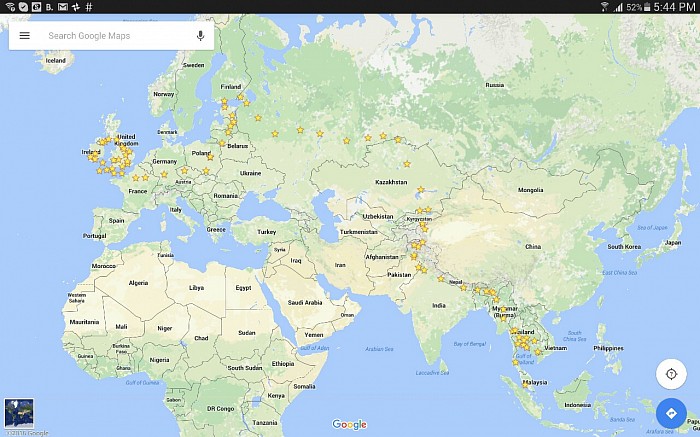 Our route so far, the stars are places we passed through.
Vin and Mary Dowd