Our first taste of Bolivia was chaos. Unfortunately we crossed at the same time as two tour buses and about  10 other motorbikes. We queued in the sun for about an hour to get through immigration, I guess we should be thankful it wasn’t raining! Then off to customs, who promptly told us we should not have crossed some imaginary line without checking through customs…hmmm! Then we were directed to some man in a shop who did our customs paperwork on the internet then printed the form to take to customs. Back to the customs queue and eventually we were done, about 2 ½ hours in all. Our worst border crossing to date.

Our first stop was Copacobana on Lake Titicaca. An unusual place, beautiful setting but the lake front was full of pedal boats and ramshackle restaurants. The street had many tourist shops and cafes, but not much to see.

We went to La Paz, crossing Lake Titicaca on a ferry on the way. LaPaz is situated in a deep valley high in the mountains. The  streets are very steep as we found out when we tried to leave early in the morning. Our sat nav gave us directions across the city, and took us up further and further and steeper and steeper roads, until we were looking at 45 degree slopes. Eventually it got too much for the Honda, plus approx 500kg, and we had no choice but to drop the bike, man / woman handle it around and ride back to the centre. Then we found the long easy way up to El Alto and onto the main road south.

We had not gone far when we came to a cross road with dozens of riot squad police standing on the corner. Nothing overly unusual and we assumed they would stop us if there was a problem. They barely glanced at us as we continued on. Only a short way and we noticed people walking on the road, then further on groups of people sitting on the road. Before we knew it we were in the middle of some major protest with no way out. We kept going assuming we would be through it soon. 15 km on and we got through! Most people would move aside for us, a few tried to stop us. The worst was right at the end where a barricade of wire, rocks, tyres and wood had been erected. We had to ride over a piece of wood between two rocks while being shouted at “no passe”. A thump on the back for our troubles and finally we were through it. Definitely our most anxious time in the whole trip and we still have no idea what the protest was about!

After that it was a smooth ride down to Uyuni, past the huge salt flats. We then headed to Turpiza. I had read that the road was under construction mid 2015 so checked with the hotel about the road. “Good road, they are doing some work out there”. So we set off on the “good road”. 205 km of dirt, corrugations, deep bull dust, sandy tracts and the occasional water crossing…. Its still being debated whether the amazing scenery towards the end made it worthwhile, we dropped the bike at least 5 times, and to add insult to injury, Bolivia is the first place we have been where people drove past while we were still lying on the ground. Oh, and they are building a nice new road, should be open in 2 or 3 years at a guess! That should cut the trip from 9 hours to about 3 hours or less.

The last 40km or so into Tupiza is beautiful, and the road is marginally better, rough dirt as opposed to deep sand and dust! You drop about 1000m in altitude coming through, and some of the views are spectacular. We ran into an amazing West Australian couple, Donna and Nic, who were on a pushbike ride from Mexico through South America.

We stayed a couple of days in Tupiza, admiring the colours of the mountains before a quick easy ride to Argentina.

We have been asked a number of times if the police bothered us in Bolivia. We were not stopped once by the police in Bolivia, although there was a considerable police presence.

Getting fuel was interesting at times. It took us a while to realise there was a price for "Internationals". It was about 3 times the bowser price. Sometimes we were refused fuel. Only once did we see a notice about the price, and that was the only place that took a copy of our passport and gave us a receipt. Other places charged us the international price, but no receipt or documentation, so I have no idea where the extra money goes, or how any knows that an "International" even filled up. Bolivia is the only place we have been that we have seen anything like this. 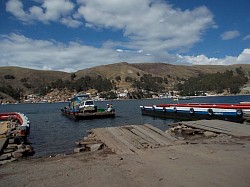 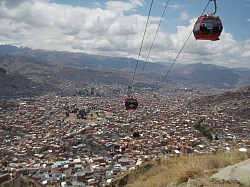 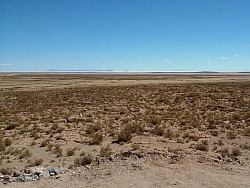 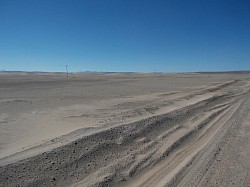 Sand for miles, road to Turpiza 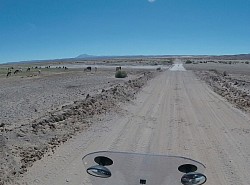 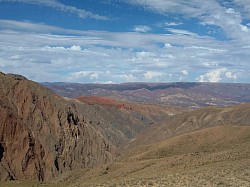 Some amazing views and colours. 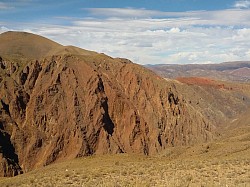 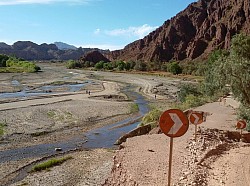 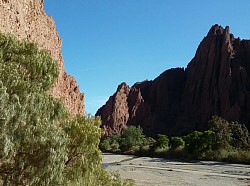